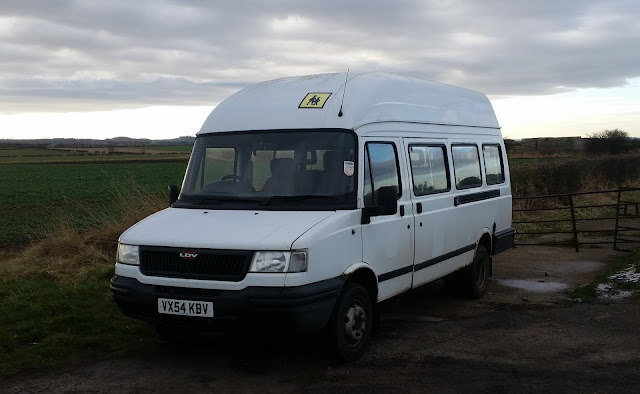 So. Sold the old Peugeot Expert mini camper as decided it was to small and wanted something larger.

Every Tom, Dick and Harry said stay away from the LDV Convoy and when you read why i was starting to think, Every van has the same or similar problems so sod it. I bought one 😀 Dont think i would fancy the LDV Pilot though. That small engine would be a drag. 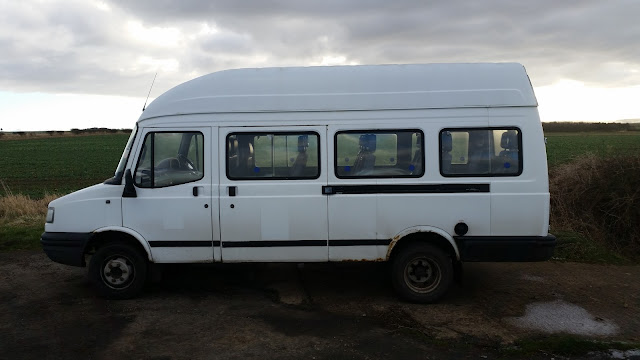 Got this old school bus for 1500 quid with a tad under 100k on the clock. Outside is not to bad and the little rust you see i will fix that up soon enough. Inside is dirty as it was used for kids on camping trips and the likes but i am ripping all the interior out and changing the front seats so no problem. 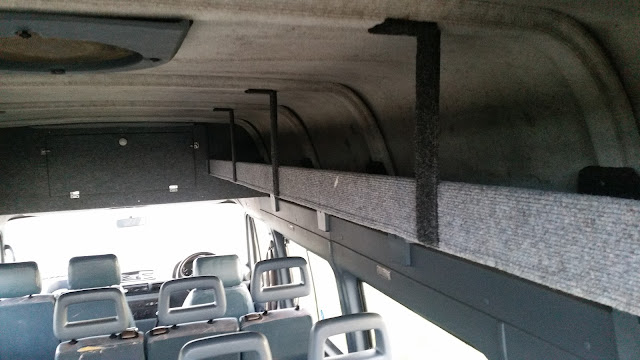 Engine is the Ford Transit 2.4 Duratorq lump what is strong. Has a speed limiter but i am looking to get the ECU mapped to take the 90bhp to 115 so this will take the limiter out at the same time. £200 though so that can wait just now. The storage box you see over the cab area is large. More than enough for two large bags of clothes for a two week jolly. I will keep the overhead bag storage also and put doors on them. May rip the carpets off them and use pine cladding to match the sides. 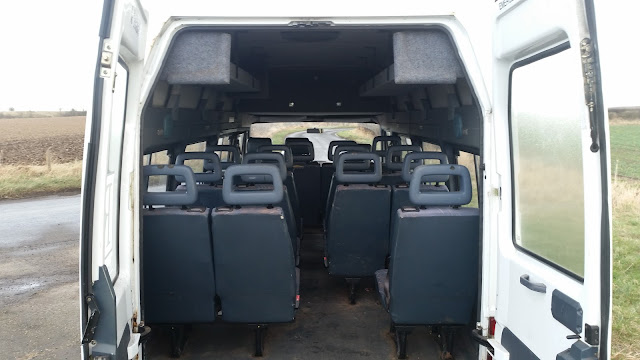 Bellow is a rough idea of the layout in the back of the bus. Under the cooker and sink will be gas,water, drainage, tools etc. The dirty stuff that you dont want in the van and this will only be accessible from the back doors. The Gas however will need a inside door so i can turn that off when not in use so need to get some door seals and vent that area through the floor. Cooking is no issue as there is a roof vent already in the van. Bonus. Leisure battery may sit up front under the bonnet. See what room i have later in and try and adapt something. Slight change of plan. The small wardrobe will now be a drop down table. I have enough storage with all the overhead's and wall unit.

So as the weather is rubbish all i can do is order a few parts. May take the back seats out tomorrow if its dry but of luck the flooring will come up easy as well as that is also getting binned for ply and laminate. Seen this yellow non slip tape in Aldi what will be great for the step in the door. Three floor vents for the gas and possibly petrol storage area and a split charge system. Some say stay clear from these Smartcom systems but i will be light use and i never had an issue in my last van so i got another. 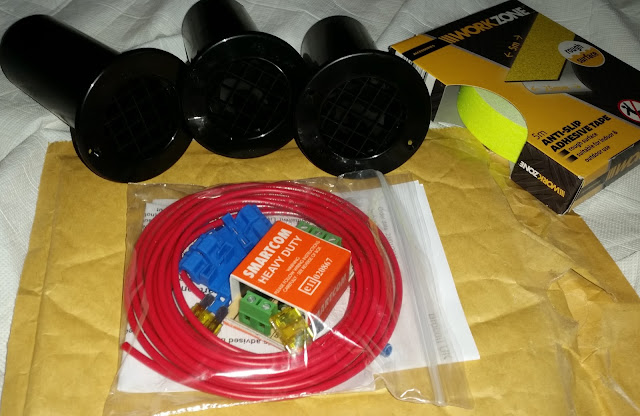 Seats out. Had to get the angle grinder out for two bolts but easy enough. There is some weight in these things. I should now be getting an extra 5mpg 😃 Now i have a better idea of how the floor plan will pan out. Unit behind drivers seat is not going in now. I only have around 1.5 foot buy the time the kitchen and sofa bed is in. I am just putting a small table top unit in for somewhere to store the leisure battery. 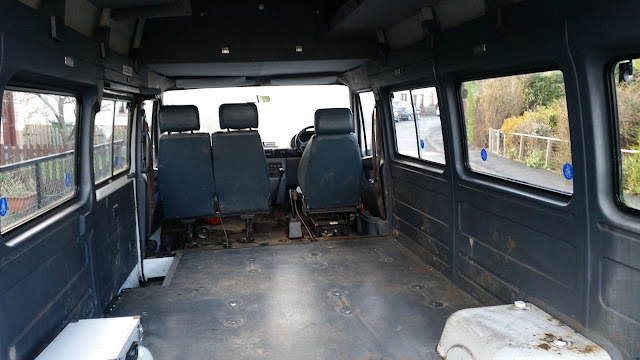 Rubber carpet out and in the bin. Its rotten, soaking and ugly. I can also get an idea what rust i am looking at and surprisingly not a lot. Binned the double passenger seat and put in the single from the back. This will do till i get a nice pair from a transit or the likes. 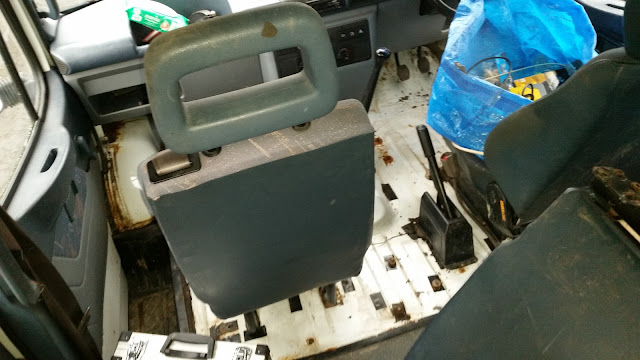 OK. Not done much apart from rattle my brain where the water is coming from, Yes i have a hole in the floor but its coming from above and i had two large puddles on the floor. This link to Vandog's site is one and the main culprit. 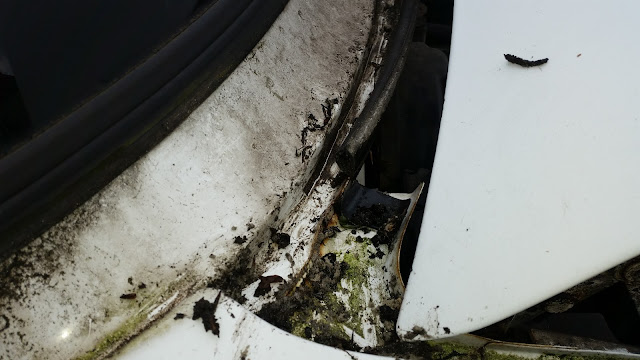 As you see all i have is dirt 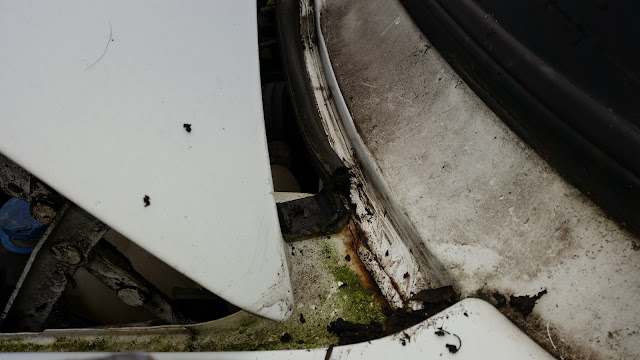 So all i can do is clean the area up and sun a line of silicon along the van seams. You can see a fair bit rust on that seam so that got lots of silicon. The little stubs what the window wipers attach to also got unbolted and silicon behind. Then i pulled the windscreen rubber back and ran silicon along that and along the top. I have since found out my Hitop is fibreglass. I was going to climb up to clean that as its minging 😨 Anyway where it meets the metal sides apparently its a common fault for the sealer to give so i need to go buy some sikaflex sealer and cut away the old rubbish and re do that. It may not be leaking but taking up the old floor is this weekend job to i will know for sure then. 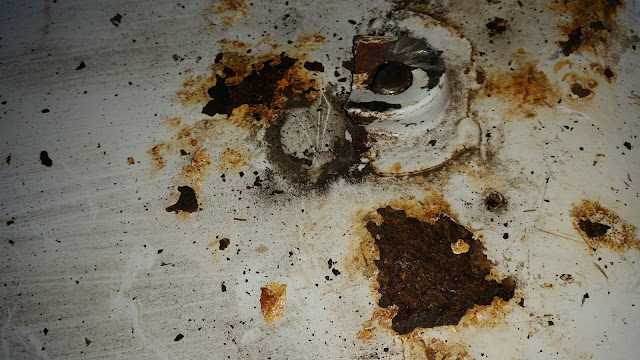 Above is the top of the rear arch. I can do this with fiberglass resin as i found out as long as its 30cm away from something structural then i am fine. I could leave the hole if need be but that would be a cold wet corner. This is the Front N/S arch 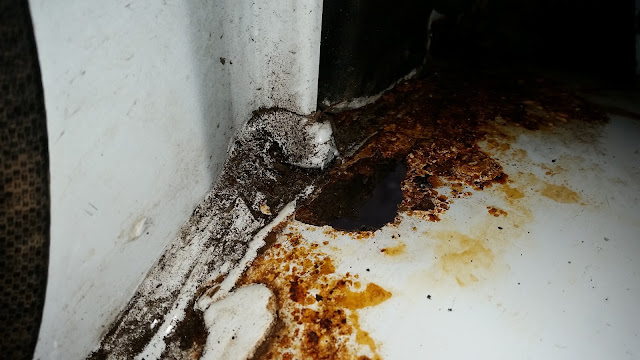 Just like the back this is not in a structural area but even with wire mesh and by the time i cut away down to good metal it would be a lot of fibreglass. It would also be £150+ to get a welder to fix this so ......... After a lot of humming and hawing i have decided to learn to weld. You can get new TIG welders on ebay from £55 and MIG from around £80. After watching a few yourtube videos i am ordering a MIG welder so this should be a laugh. Watch me set the van on fire 😀 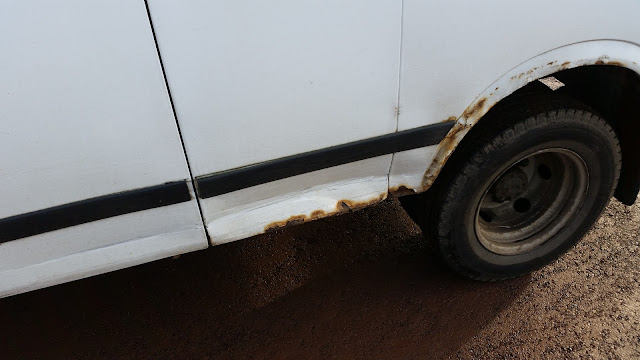 This dent is new. The below bridge i was coming over and met a JCB going the other way. Had to take corner tight and see the bit armco sticking out longer than the rest? I bloody never 😄

Still you got to laugh. Not that bothered as you see i needed to fix the sill and arch anyway. The dent i can knock out from the other side. Not sure about the door but all will be good in the world again soon. 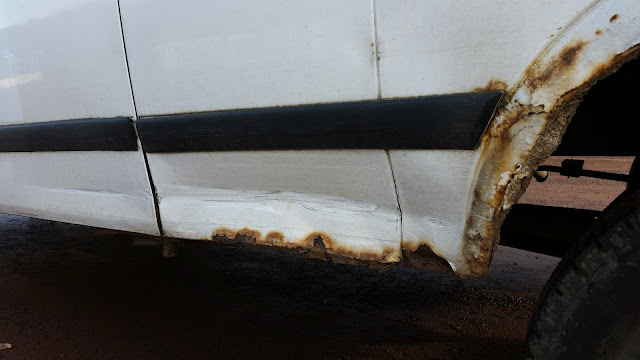 Still looking for a leak. Sealed up both sides of the wiper stalks with Sikaflex but not convinced. Im sure its the seam where the wing meets the door/window roof support. Ill give it 24 hours to dry and have a bucket of red water to chuck over it to see where its coming from. Fingers crossed

Seems dry. I threw a bucket of red dyed water over the wiper arm/stalks area and side sills and nothing came through. 20 minutes later a bucket of clear water. About an hour after that i seen two very small drips inside but....... I was mucking about with the heater and i could have got water into the intake so not worried. I could do with a night of rain before i start thinking about a new carpet 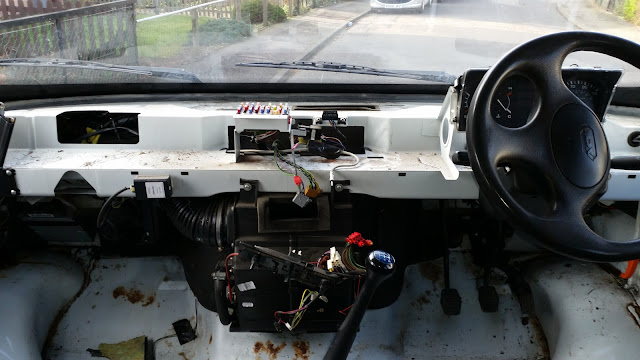